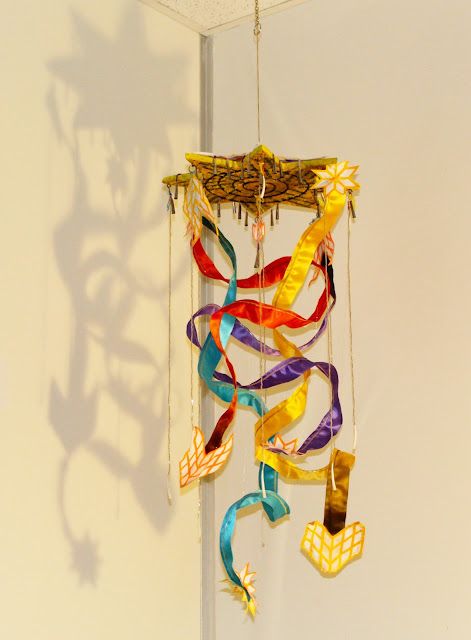 MDF particle board, ribbon, wire, glass beads, screen printed fabric,
jingles, dentalium, disco ball motor
30" x 14" x 14"
2017
As a Dakota person living in the diaspora that was created as a result of the U.S- Dakota War, I explore the confusing tangle of paths traversed between more than thirty places spanning the Midwest, the Great Plains and into Canada that thousands of Dakota people traveled from 1862 through the 1880s.

As a mobile structure, the piece engages gravity and the air currents of its surroundings, subtly moving with them. Beginning with a structural form of a Morningstar, four arrows wind around the piece and each other, illustrating back-and-forth paths taken across distance. The arrow’s points are made from silk screened Morningstar forms which have been cut into four pieces, representing our separation in all four directions. The names of the places Dakota people were moved to and from are written upon the base Morningstar form.

A beaded spiral radiates as the piece rotates, either from wind or the motorized base, signaling disorientation. Ribbons, jingles and dentalium, which I use in creating powwow regalia, come together to form a column of vitality, which shows that, despite our separation and struggle over generations after being forced from our sacred homeland of Minnesota, we do remain a people with our culture. 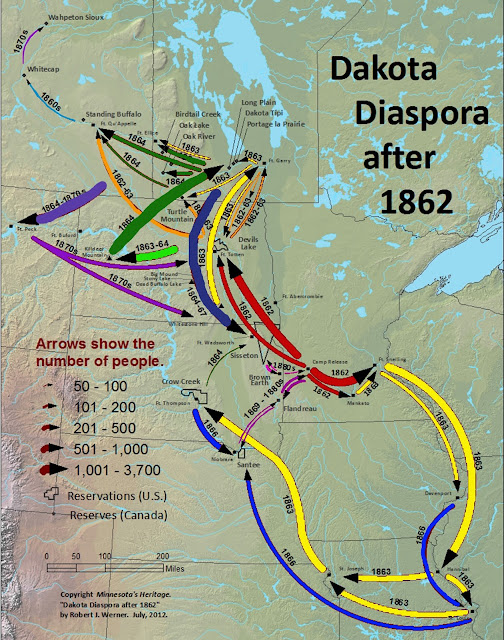 In my research, I came across "Dakota Diaspora after 1862" which was published in a 2012 issue of Minnesota's Heritage magazine, created by geographer Robert J. Werner. It maps the places where Dakota people were forced to go between the time of the war and the 1880s, when the creation and settlement of the present reservations and the assimilation period began. I color coded the map, as you can see above, to try to make sense of the routes and to correlate with the arrows in the piece.

The map shows these places where Dakota people were forced to go after the war and displacement and dispossession by white settlers:

Over time the Dakota diaspora has expanded, as the result of mass re-settlement stemming from urbanization caused the Indian Relocation Act, and many other reasons. Still Dakota people agree that Mni sota, today known as the state of Minnesota, remains our homeland and place of origin.
Posted by Erin Genia at 1:17 PM No comments:
Email ThisBlogThis!Share to TwitterShare to FacebookShare to Pinterest
Newer Posts Older Posts Home
Subscribe to: Posts (Atom)