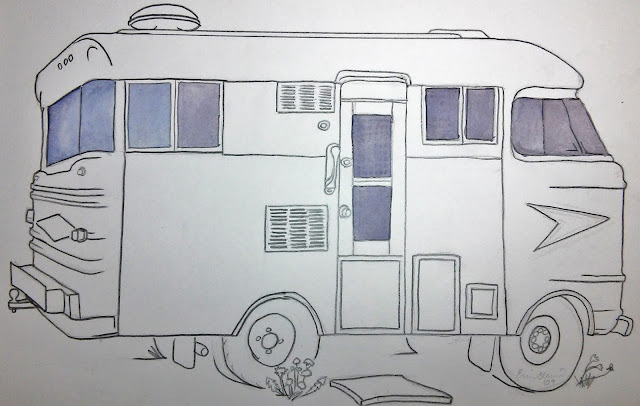 The Marshmellow is my trusty 1968 Dodge Chinook Mobilodge which has been converted into my art studio. It's most recent transformation includes a new floor (which was desperately needed), built-in shelving and a fresh paint job. It feels much more spacious, clean and comfortable now.

With a classic vehicle like this one, upkeep is a constant necessity. I used to live in the Marshmellow, and after the birth of my children, decided it would make an ideal studio. I received a National Native Creative Development Grant in 2007 and 2008 to convert it into a workable space for art-making. It's equipped for doing painting and other 2D media, ceramics, silver-smithing, small-scale carving, and framing.

This year's repairs and upgrades have improved the atmosphere inside, making it more conducive to the creative process than ever before!
Posted by Erin Genia at 10:29 PM No comments:
Email ThisBlogThis!Share to TwitterShare to FacebookShare to Pinterest 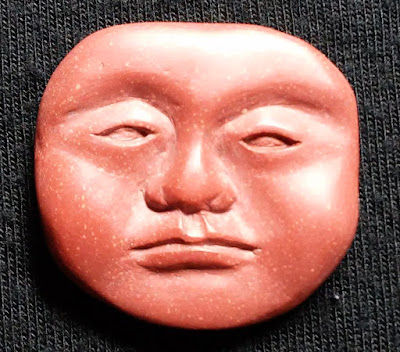 This small stone face is made of canupa inyan, a stone sacred to Dakota people. It is the stone equivalent of our people. This button-sized piece depicts an ancestor's face emerging from the past, looking ahead into today, and beyond, into the future.


Posted by Erin Genia at 8:28 PM No comments:
Email ThisBlogThis!Share to TwitterShare to FacebookShare to Pinterest

Raku-fired clay, gold leaf and pigment
15.25" x 15.5" x 5"
2015
Open Pit Gold Mine Vessel came about from my journey to Aotearoa (New Zealand) for an Indigenous Artists' Gathering. During my flight, looking at the land below, I saw distinctive lines cut into the earth from open pit mine operations -- this was the same in the U.S. and the islands we flew over. Something Indigenous people have in common all over the world is the struggle to protect our ecosystems from harmful resource extraction that damage land and people. During the gathering, I slab-built, glazed and raku-fired this vessel. On the trip home to Washington, it broke into several pieces. Undeterred, I used re-purposed gold to highlight the cracks and mimic gold veins emerging from the rock. During this process, I learned about the Japanese method, kintsugi, the art of repairing pottery and the belief that the piece is more beautiful for having been broken. 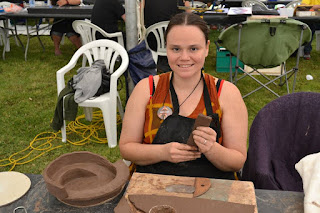 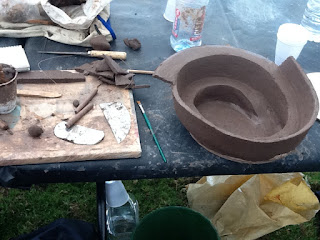 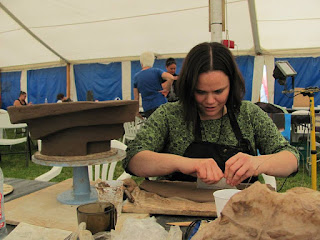 This picture shows the piece being pulled, red-hot, from the shopping cart kiln after it has reached temperature and is about to be placed into a receptacle with wood shavings. 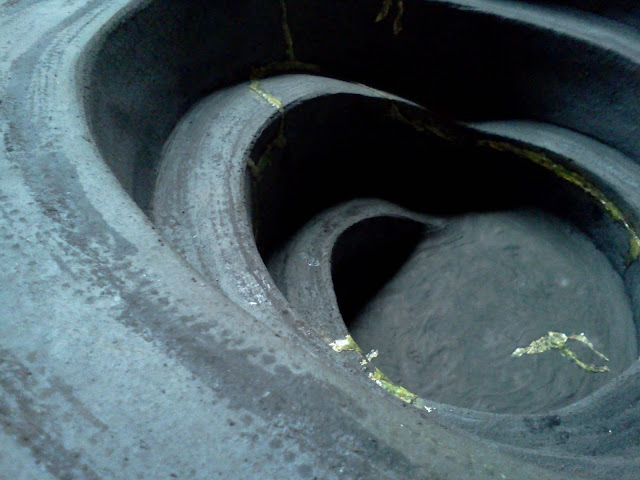 The piece won "Best of Show" at the 2015 In the Spirit Exhibition at the Washington State History Museum and will be on display there until August 30th. It received some interest on this blog,

and was reviewed by the Arts and Culture editor in an article on the exhibition in the Tacoma News Tribune. The article stated, "Best in show, though, deservedly goes to Erin Genia (Sisseton-Wahpeton Oyate). Her “Open Pit Gold Mine Vessel” is a slow spiral of gray, raku-fired clay that descends like a hell-bent path down to an oozing black pool. Gold leaf drips like blood over the cracked edges — a Japanese technique of repairing broken pottery (kintsugi) that Genia discovered when her initial sculpture, inspired by open-cut mines, was damaged. The effect is precarious, gaping; a profound comment on the ecological and spiritual damage of such mines."