Earth on Display/ Experiments in Pedagogy - MIT School of Architecture and Planning
November 4, 2018 at the Harvard Museum of Natural History

Dakota philosophy holds that humans are not separate from or greater than the earth and its processes. With this in mind, how can we approach drastically changed landscapes resulting from widespread human-caused environmental degradation?

Once the sought-after parts of the earth’s body are taken and processed into the essential elements that make modern living possible[1], what happens to the landscapes left behind? Using earth itself, in the form of clay, vessel-like representations explore these contours.

Using topographical maps, clay vessels molded in the form of mined earth, and specimens from the mineralogical collection of the Harvard Museum of Natural History, four sites of mining in the US are presented, opening a discussion around the ethics and implications of exploitative mining.

Bingham Canyon mine in Utah, operated by Rio Tinto Kennecott is the largest open pit mine in the world and extracts copper, gold, silver, and molybdenum. Uranium from Midnite mine on the Spokane Indian Reservation in Washington, helped to fuel the Cold War and is now a Superfund site. Fort Knox gold mine is located near Fairbanks, Alaska, operated by Kinross Gold, uses cyanide leaching to extract gold from the rock, and has a huge energy and water use footprint. Twilight MTR (Mountain Top Removal) mine, operated by Massey Energy/ Alpha Natural Resources is located in the Blue Hills in Lindytown, West Virginia. Mountain Top Mining is a highly destructive method that removes “overburden”: rock, mountainsides, flora and fauna, in order to get to the coal beneath it.

Around this table installation, viewers shared the commonality of interrelationships between all forms of existence. Iȟpéyá, means to discard/ throw away, and is used here to describe the increasing number of places on earth that are spent, trashed, contaminated, detonated, destroyed.


Píyéhpíčášní means broken beyond repair/ unfixable, and in this context implicates Western philosophies of separation from nature and the hierarchy of man which, compounded over hundreds of years of dominance, have caused widespread ecological collapse and climate change.

We don’t have to look far to see the landscapes altered by modern living. What’s harder to see is the imperative of remembering our deep relationship to the land we live on/ land we are.


[1] Rio Tinto http://www.kennecott.com/about-us “At Rio Tinto Kennecott, we mine essential elements that make modern living possible. Our products are used in cell phones, computers, CAT scans and hybrid electric cars. Nearly everything used today relies on materials we produce.”
Posted by Erin Genia at 1:11 PM No comments:
Email ThisBlogThis!Share to TwitterShare to FacebookShare to Pinterest

Existing in the void/ unwell

Out now! Get the album on bandcamp.

Posted by Erin Genia at 5:15 PM No comments:
Email ThisBlogThis!Share to TwitterShare to FacebookShare to Pinterest 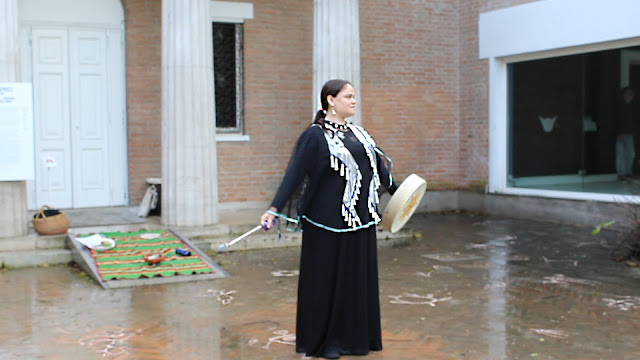 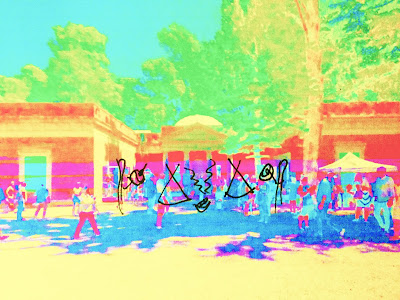 Posted by Erin Genia at 2:22 PM No comments:
Email ThisBlogThis!Share to TwitterShare to FacebookShare to Pinterest


The tipi sound amplifier is a drum interface which invites people to create audible vibrations that will reverberate through space.

The traditional tipi is a Dakota portable home structure for an extended family, it is a shape of strength. In this piece, the tipi contours have been stylized to encourage sound transmitting capabilities, and it is home to four sacred drums.


Each drum plays a different tone. The drums reside within the structure via tension support cords which enable the sound to be amplified and harmonized, projecting upwards and outwards. 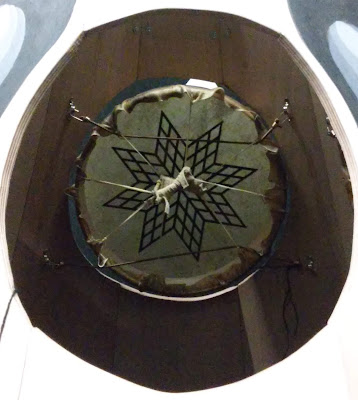 The drums are painted with white, yellow, black and red morningstars, colors of the four directions. The morningstar is symbol of Dakota cosmology and in this context, represents our people and our ways of life that are indigenous to the land. The tipi structure resonates with the pure sound of the drum, directing it down into the ground, each beat a communication to the earth.


The acoustic tipi references unktehi – a supernatural water serpent of Dakota legend, who is responsible for flooding and peril in the water and wakinyan – thunderbeings who bring atmospheric catastrophe, warning of impending flooding, sea-level rise, and the increased intensity of planetary storms due to climate and environmental change. 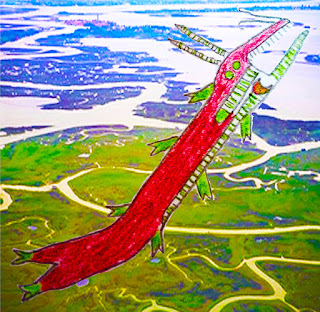 At the Lithuania pavilion, at the Venice Architecture Biennale, through the concept of “Swamp Radio (On Transmitting)” we can explore the Venice lagoon as a site for the realization of the interconnectedness of life on earth. Wetland ecosystems occupy a place in between the worlds of the water and the land, teeming with life, and are increasingly threatened by human activity. 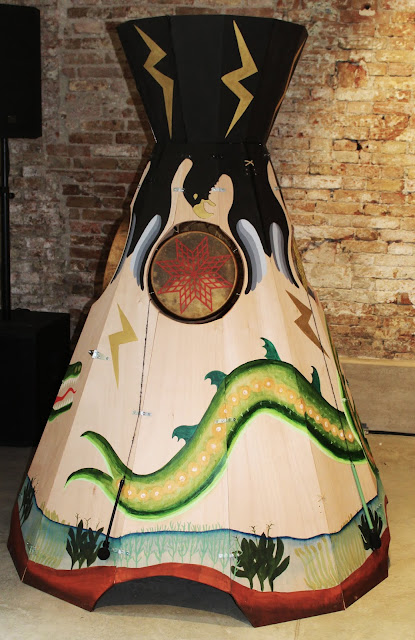 Through the sound of the drum, Acoustic Tipi provides an encounter, a moment of reflection, upon the interrelation of life on earth and throughout the universe. The piece allows up to four people to play at once, creating a collaboration which reduces the distance between the art and viewer, and each other. Made from wood which can be easily taken apart and reassembled, its location can change in order to activate different spaces within a built environment and other sites. 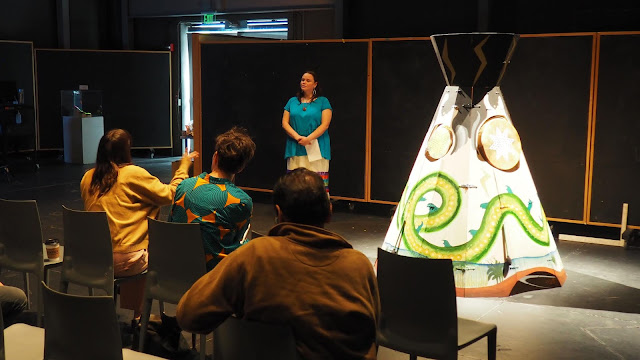 Through the power of rhythm, vibrations will reach outward forever into infinity like a synesthetic prayer, creating the possibility of an organic communal experience. The piece is a call for unity to address issues of ecological decline, which, according to Dakota philosophy, is the responsibility of all people.