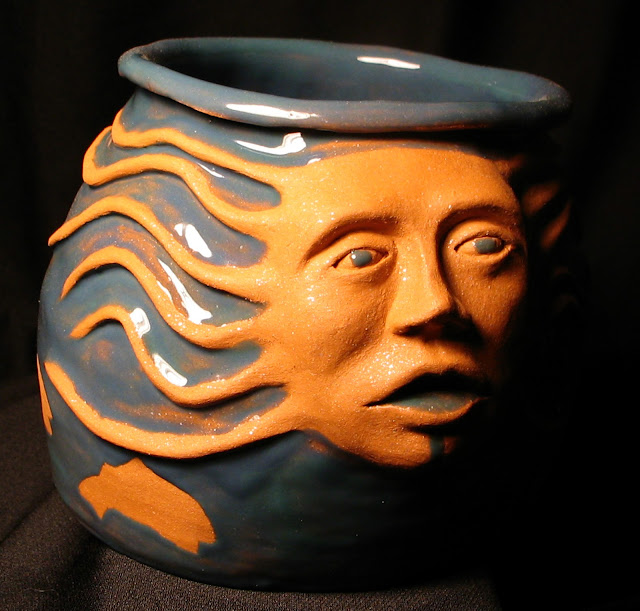 This vessel pays tribute to the water protectors past, present and future.
Posted by Erin Genia at 10:46 PM No comments:
Email ThisBlogThis!Share to TwitterShare to FacebookShare to Pinterest 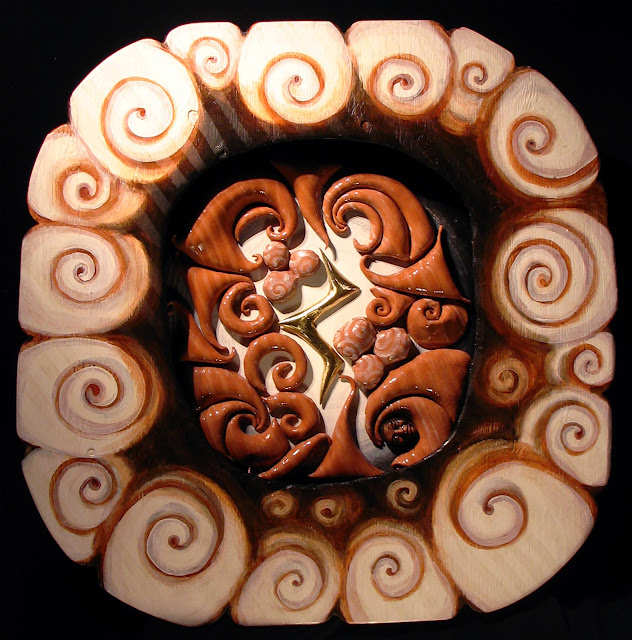 
With a red earth palette, clay is used to render a convergence of epic storms. Air currents, clouds and whirlwinds collide to depict atmospheric turbulence, connecting increased climactic disturbances to human activity - portrayed by a tiny human face caught in the fray. Streaks of clear glaze bring a deluge of rainfall. A shining brass lightning bolt captures the moment the Wakinyan, or Thunderbeings, speak a warning of imminent chaos and large scale earth crises. 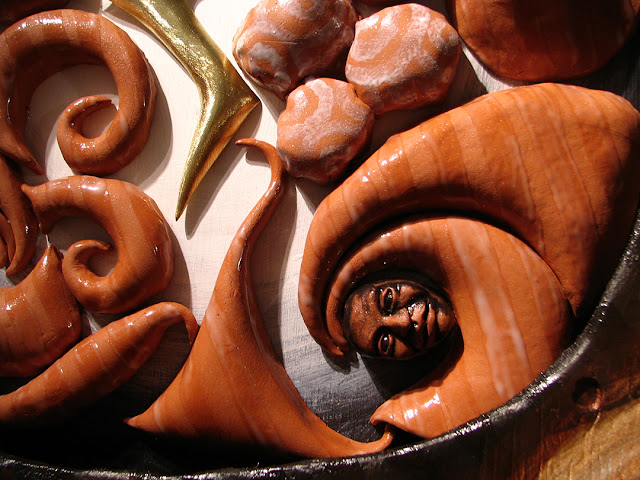 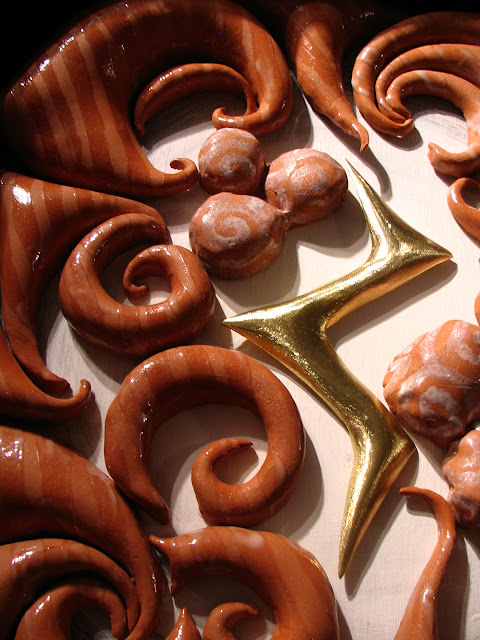 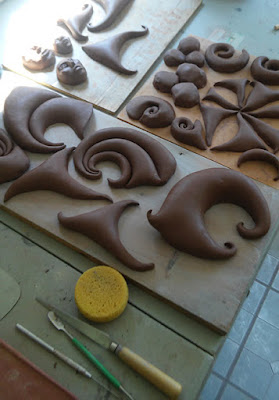 One of the bisque-fired swirls, you can see the sparkling mica flecks in the clay body: 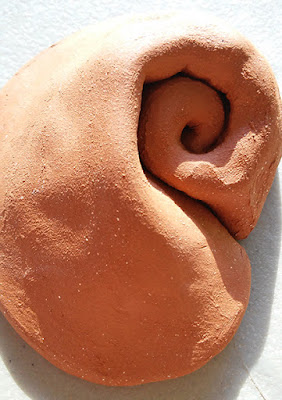 Posted by Erin Genia at 9:20 PM No comments:
Email ThisBlogThis!Share to TwitterShare to FacebookShare to Pinterest 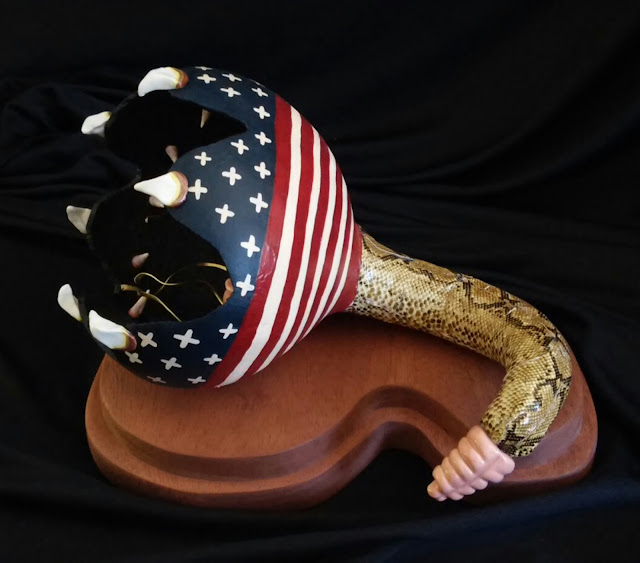 From an indigenous person’s perspective, American culture can be depicted as a monstrosity, guilefully devouring other peoples and cultures in order to claim them. 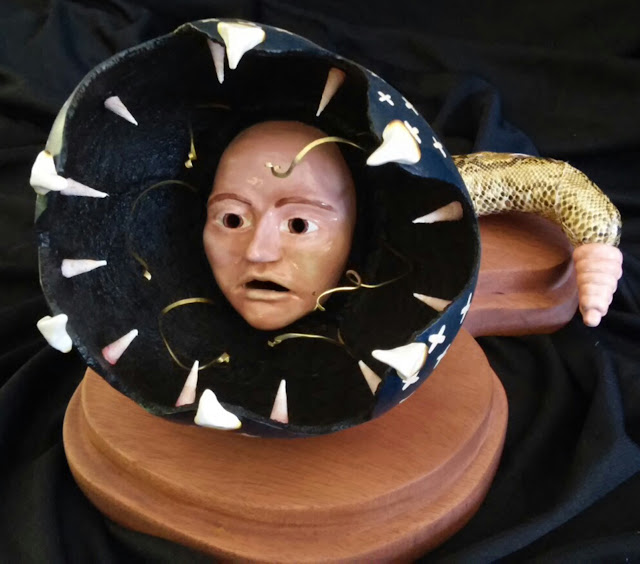 This piece was made for a show, #HandsOffMyHeritage appearing at the Duhesa Gallery at Colorado State University from July - December 2016, in which ten indigenous artists explore concepts surrounding appropriation of Native American culture. I wrote an artist statement explaining my thoughts on this issue for the show. 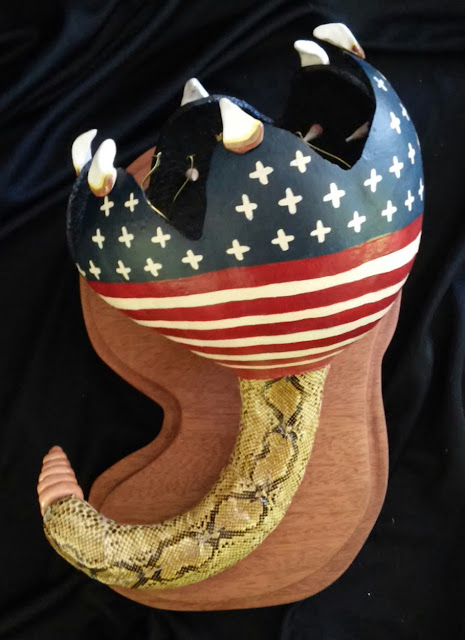 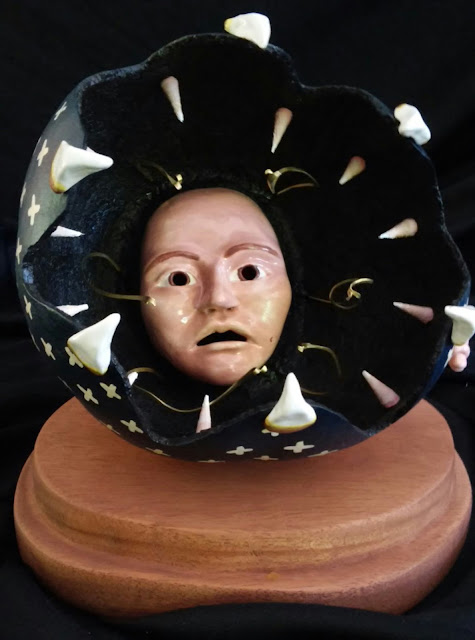 I’ve often encountered people within the dominant society who do not understand why cultural appropriation is wrong. Many people think that wrongdoings against Native peoples are all in the past. Cultural appropriation is a contemporary wrongdoing and it matters because it represents a continuation of an approach to indigenous people that involves theft. It also relies on an unequal balance of power, and it’s harmful those who are in the process of recovering from cultural genocide.

At its core, cultural appropriation constitutes the taking of aspects of Indigenous peoples’ cultures for monetary or personal gain, and it is no less than a continuation of the colonial dispossession of Indigenous peoples. Historically, American settlers took every unjust advantage to gain the land and natural resources belonging to Native people, through corrupt treaty-making, murder and policies based on dehumanization of Native people. It’s a fact that the USA, as it exists today, is a result of thievery. American culture, as practiced and propagated by settler descendants is based upon this theft and is propped up by the flawed notion that American settlers have a divine right to that which belongs to Native people. This notion, which overrides ethics, did not disappear with time, it has in fact become entrenched, as evidenced by the epidemic of cultural appropriation in today’s consumer markets and beyond.

Sometimes, people will defend cultural appropriation by stating that it’s simply cultural sharing. However, this comparison is problematic due to the fact that sharing implies that the parties are on equal footing, or that there is an equal distribution of goodwill of both sides. The power dynamic between indigenous people and settlers is exemplified by inequality – Indigenous peoples are in a state of occupation, and there can be no equal sharing of cultures. Furthermore, Native peoples were forced to join American culture through cruel assimilation policies. With true cultural sharing, one people would not be subjugated by another.

After centuries of calculated genocide and assimilation, Native cultures have been pushed to the brink of disappearance. It’s been less than 40 years since the passage of the American Indian Religious Freedom Act which allowed Native Americans to legally practice their sacred traditions within the United States. For many Native people, we have to work very hard to access important aspects of our culture, to preserve and strengthen them, and sometimes we are unable to access them at all. It adds insult to injury to see aspects of our cultures cheapened and taken out of context by people working within the infrastructure of the dominant society who seek to selfishly gain by taking what is ours.

Despite today’s capitalist society, in which cultural appropriation runs rampant, I am constantly struck by its normalization, and the insensitivity towards Native people which reveals widespread ignorance of Native people’s issues. I’m proud of those who stand against the practice with an enlightened critique.

Also appearing in the show is this acrylic painting: 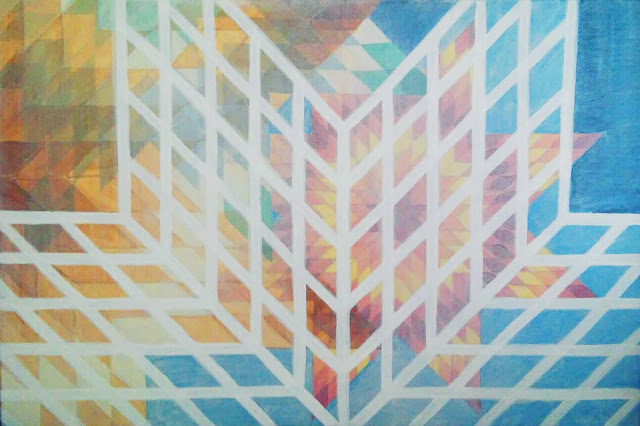 Dilution: resiliency
Acrylic
24” x 36”
Cultural assimilation of indigenous peoples is carried out through many different mechanisms, including cultural appropriation. Here, Dakota morningstar patterns interact in layers on canvas, representing the beauty and complexity of our culture and people. Each layer has been tinted with white, which, like assimilation, obscures them. On the top layer, the star is empty of color, yet beauty remains.
Here is a poster for the exhibit: 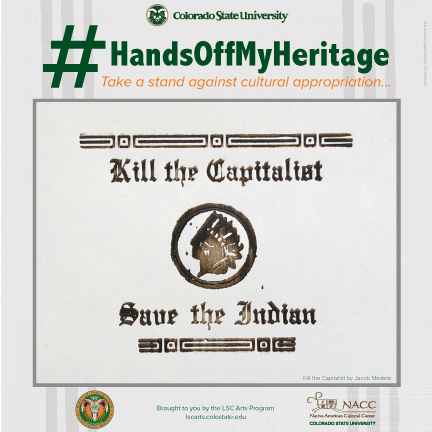