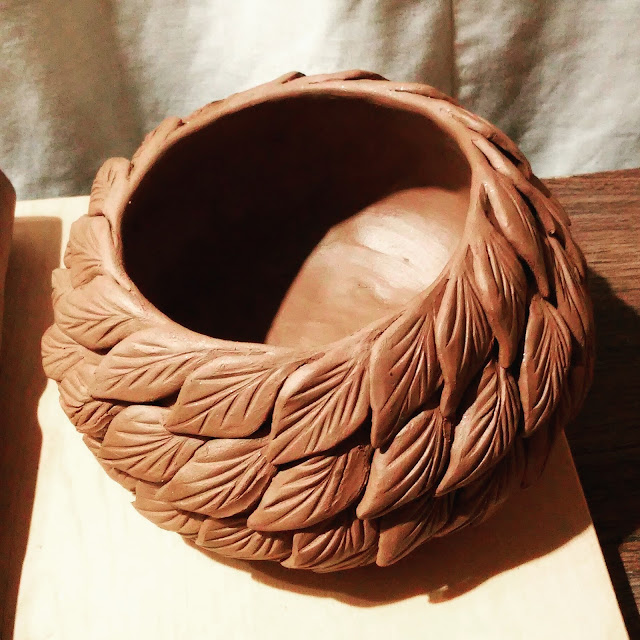 This little coil-built pot decorated with leaves is pictured here before firing.
Posted by Erin Genia at 3:51 PM No comments:
Email ThisBlogThis!Share to TwitterShare to FacebookShare to Pinterest 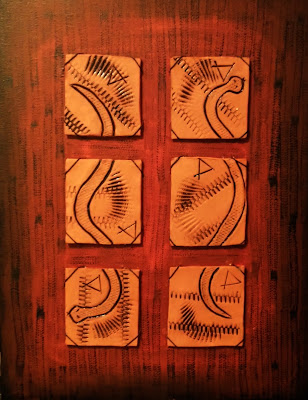 The Dakota Access Pipeline, like all pipelines, has been called the black snake by our tribal people. I depicted two here, pressed into earthen tiles, crossing spaces which signify great distances. Each space is designated a home with a tipi. People's addiction to oil is represented by tire tracks indented into clay and printed in black on the background of the painting.

Created for the "Protect the Sacred: Native Artists for Standing Rock" show at Spaceworks Gallery in Tacoma.

Posted by Erin Genia at 1:26 AM No comments:
Email ThisBlogThis!Share to TwitterShare to FacebookShare to Pinterest


My son, Samuel and I have created new pieces that are showing in "Protect the Sacred: Native Artists for Standing Rock," at Space Works Gallery in Tacoma this month. Sam is 15,  and this year he won the Congressional Art Award for our district. He wanted to create a piece about the pipeline and I'm excited that his work is in this show.

Curated by Asia Tail (Cherokee), the show features some of my favorite artists. See the press release below for the full listing. The works are for sale, and Sam and I will donate proceeds to the Standing Rock tribe for their fight against the Dakota Access Pipeline.

The opening reception took place on Thursday, January 19th, and the show will remain up until February 16th.

The event has been reviewed in the Tacoma News Tribune, which noticed one of my works: "Erin Genia (Sisseton-Wahpeton) translates the oil threat into reality using thick black vinyl lino-printed with flowing teal 'water.'" In Indian Country Today, my piece, "Mobile Spill Response, pictured below, was featured in a February 10th article in Indian Country Today. It states, "Erin Genia’s (Sisseton-Wahpeton) 'Mobile Spill Response,' uses clay, vinyl and found art as a mobile above a child’s crib. Showing the dangers of oil spills, it plays on the usage of the word 'mobile' and the Exxon-Mobil company." 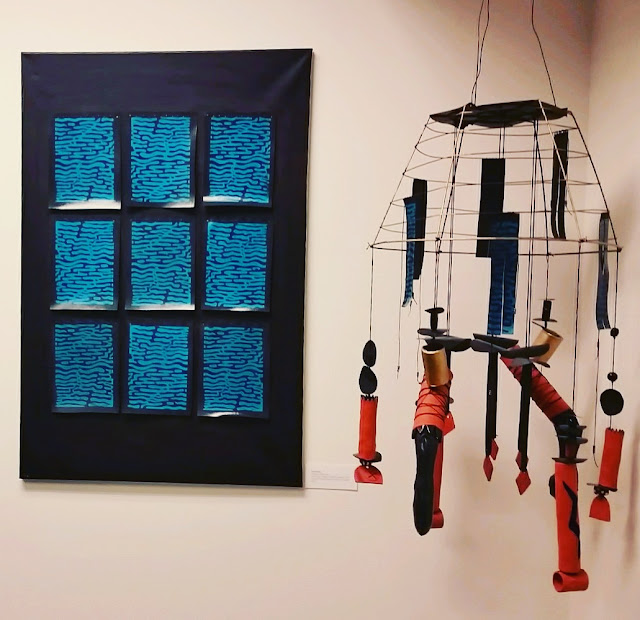 
The show received a rave review in Susan Noyes Platt's blog Art and Politics Now. Of my work and Sam's piece, "No DAPL," it states "Erin Genia creates highly original ceramic sculptures with hard core messages like  Facing/Not Facing: Toxic Devastation From Oil, just above) or Mobile Spill Response (top images) and finally, not illustrated, (Mni Wiconi: Water is Life Oil is Death.) Next to Genia is the work of Samuel Genia, her fifteen year old son with a bold graphic statement." This is Sam's first published review of his work, which you can see below. In addition, his piece sold and the proceeds will go to the ongoing legal battle of the Standing Rock Sioux and Cheyenne River Sioux tribes.

It's a beautiful show, with Native artists in our region creating work in solidarity with the water protectors who are defending the ecosystem surrounding the Missouri River against exploitation by the oil industry, and Native artists who have donated their existing work to the cause.
*The new president's memorandum, signed on January 24th, signals his readiness to move forward with the Dakota Access Pipeline, bringing the struggle at Standing Rock to a critical level. The Army Corps of Engineers abruptly ended the Environmental Impact Statement process, and the owners of the pipeline, Energy Transfer Partners will continue to drill under the Missouri River to complete the Dakota Access Pipeline. This development makes it even more important for this show to be seen, and efforts against the pipeline to be supported.*

Here is the press release:

Protect the Sacred: Native Artists for Standing Rock An Exhibition of Contemporary Indigenous Art in Tacoma

Tacoma, WA – Spaceworks Gallery is pleased to present the group exhibition, Protect the Sacred: Native Artists for Standing Rock, featuring over 25 Indigenous artists from across the Pacific Northwest. Protect the Sacred runs December 31st to February 16th, with an opening reception on Third Thursday, January 19th, 6pm-9pm. The gallery is located at 950 Pacific Avenue, Tacoma, WA 98402, and an entrance off 11th Street. This exhibition is curated by Tacoma-based artist Asia Tail (Cherokee Nation of Oklahoma), and proceeds will support the fight against DAPL construction in North Dakota.

Describing the exhibition, Tail states, “Protect the Sacred gives voice to the diverse Urban Indian community of this region. As Native artists, we reject externally constructed expectations for people of color, who are often confined by the recognition of their ethnicity in the mainstream art world. This exhibition empowers Indigenous artists to represent themselves, whether in traditional or contemporary contexts. Through our work, we hope to showcase the complexity of our cultures and identities, and broaden perceptions of Native American art”.

Although the water protectors achieved an incredible victory with the permit denial, the fight is not over. So close to the inauguration, it is more urgent than ever to protect Native land, rights, and sovereignty for future generations.