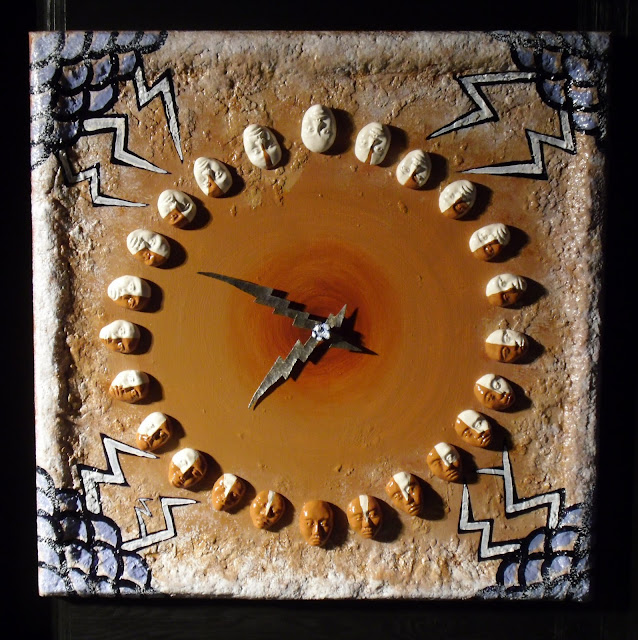 
Using two different varieties of ceramic clay and a working clock, I explore the Western-imposed concept of blood quantum upon indigenous identity. Like the Western construct of time which was imposed through colonization, blood quantum has imprinted itself upon our collective psyche. Using the image of lightning, which instantly attracts the attention of all who see it flash, I seek to draw attention to the dangers of basing our identity upon racist instruments.

Blood quantum originated during a historical period of the U.S. when Native Americans were viewed as a vanishing race. Today, it enjoys widespread use by tribal and federal governments as a legitimate method of determining whether a person can be considered an American Indian. This piece warns that continuing its use inevitably leads to a countdown to our extinction.

Faces are depicted as pie charts to show the nonsensical nature of using this race-based method for quantifying Nativeness. Nobody looks like a pie chart. Our survival as a people is based upon a whole spectrum of qualifying factors, from lineal descent to connection to our tribal communities, to protecting, preserving and revitalizing our tribal cultures. It’s time to reassess the viability of the blood quantum system.

Exhibited @ the "In the Spirit: Contemporary Northwest Native Arts" show at the Washington State History Museum in 2011. Won Pendleton Prize (People's Choice runner up). It has also shown at the Wing Luke Museum in the exhibition entitled "Under my Skin: Artists Explore race in the 20th Century," in 2013. View this video response to the piece:
Art historian and critic Susan Noyes Platt wrote about the piece here, stating "A ceramic work by Native artist Erin Genia charts the dilution of racial color as though on a clock face with faces losing their color as you progress around the clock."

The work will appeared at the Museum of Northwest Art in La Conner, Washington from October 2015 - January 2016 in "Not Vanishing: Contemporary Expressions in Indigenous Art, 1977-2015," the exhibition, which is being curated by Gail Tremblay, (MicMac/ Onandaga) and Miles Miller (Yakama) will feature 44 artists from Washington, Oregon, Montana, Idaho, and British Columbia whose work has been important to the Contemporary Native American Art Movement. Platt revied the show and said this of the piece's inclusion, "Erin Genia’s  Blood Quantum Countdown affiliates with conceptual art as it poignantly points to why these artists so urgently sustain their cultural heritage in the midst of their immersion in the contemporary world." "Not Vanishing" also traveled to Heritage University and the Missoula Art Museum where it will be up until December 2016. I traveled to the show's opening at MAM and gave an artist's talk about the concepts raised by the piece.
Posted by Erin Genia at 2:50 AM
Email ThisBlogThis!Share to TwitterShare to FacebookShare to Pinterest